When is a car a classic car ? 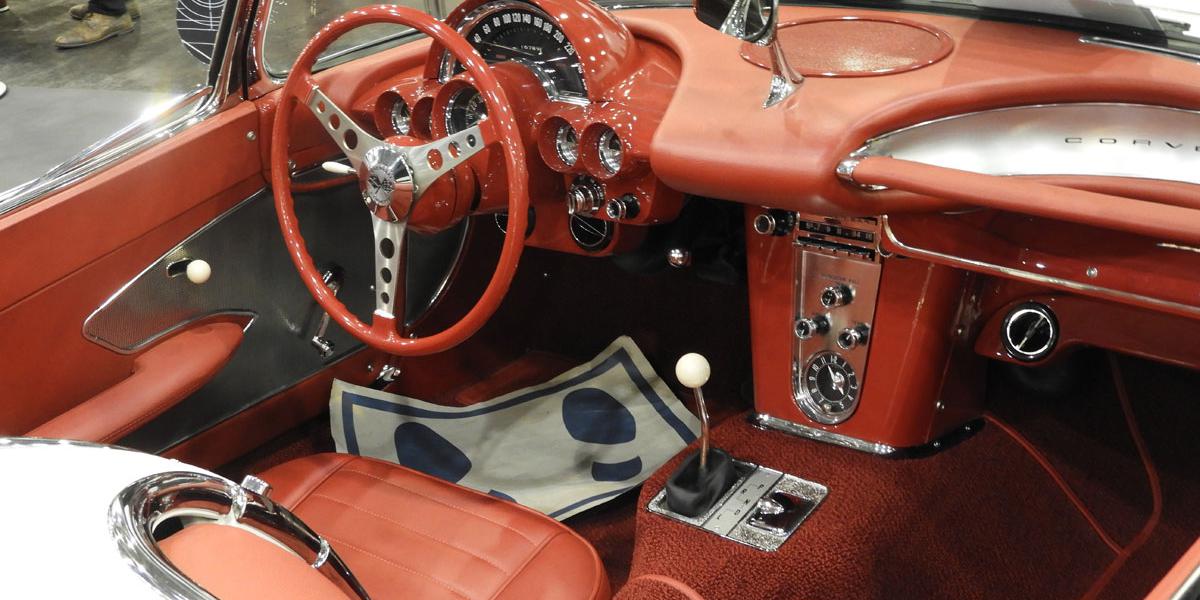 When does my car qualify as a classic car?

A classic car (UK) is one where the car's age at the end of the year of assessment is 15 years or more and the market value of the car for the year is £15,000 or more.

The above is taken "word for word" from HMRC and it involves a calculation that considers capital investment and market value before arriving at the value.

However, "when is a car a classic ? " is a hotly debated topic.

As a rough guide, accepted in some circles and, yes indeed, disputed in others, the following categories are defined by the period within which the car was built, as opposed to the exact age of the car:

Some recognise classic car status when it meets the criteria qualifying it for Classic Car insurance which still presents huge variables.

Some insurance companies might decide if a car falls into the "Classic Car" category by how it is used.

Example A
A car of a certain age kept in a garage and only taken out for a spin at the weekend, perhaps registered with a car enthusiasts club, with a low annual mileage of 2,000 to 3,000, will be regarded and insured as a Classic Car.

Example B
In contrast, a much older car kept in the garage and well maintained, but is the owner's principal mode of transport used for getting to and for work may not.

Club Membership
Incidentally, being a member of a classic car enthusiasts club could well contribute to reducing the cost of your car insurance premium.

F1 World Champion Nico Rosberg takes us out for a spin up into the mountains of Monaco in his 1955 Gullwing. It's got 30,000 on the clock, and it's a nice reality check, introduction to the Mercedes Benz 300 SL.

As a generalisation, the classic car status applies to vehicles over 20 years old. Antique cars over 45 years old and vintage cars are built between 1919 and 1930.

However, this varies in the DMV (Department of Motor Vehicles) from state to state, and insurance companies and classic car clubs classification differ.

The state legislation impacts whether you must have an annual safety check, are compliant with emission standards, need to retrofit sear belts, and if you register your car as an antique and pay a reduced fee, you may only be entitled to drive exhibitions and special events, which deters many people from registering.

This is separate from any insurance conditions, such as a maximum of 2,500 miles per annum.

The sales tax and car tax can vary as well.

In some states, to register a vintage car, you need to have another vehicle registered as the car you drive day to day.

According to Hagerty (Insurance company), cars from 1900 to 1979 are considered either Antique or Classic. If the car is manufactured in 1980 or later, it is considered a collector car.

As an example, in Texas, there are 3 ways to register a classic car:

So, Clear as mud so far?

The Antique Automobile Club of America (AACA) formed in 1935, introduced additional "classes" as time progressed, including in 1953 the inclusion of the early Model A Ford cars in a new Class 18, "Antique Cars w/four-wheel brakes."
In 1975 and current to date, it includes "vehicles 25 years old and older into the classifications, effective February 1st, 1975.

The Classic Car Club of America (CCCA) "is about vintage automobiles and the pleasure of the sport. Since its beginning in 1952, the Members of the CCCA have been dedicated to the collection, preservation, and enjoyment of the world’s finest cars. Automobiles manufactured from 1915 to 1948 remain the primary focus of the club today."

How many classic cars are there in America?

Stemming from a conversation in 1996, Jon Lee, the Classifications Chairman of the CCCA attempted to count the number of classic cars built that the CCCA considers Full Classics.

Initially, he decided to focus only on American classics and then foreign classics separately, though interestingly, 1,874 Rolls-Royce of America vehicles produced from January 1925 were included, whereas Classic Buicks made for export and commercial chassis were not.

His findings, listing classic cars in descending order of production volumes, makes for interesting reading and some obscure models get a mention.

Some statistics derived from his report:

In 2016 The Uk produced a total of 1,722,698 passenger cars which was the highest output between 2003 and 2020, with the latter being negatively impacted by Brexit and the Coronavirus pandemic.

In 2020 China led the world in passenger car manufacturing producing 21.4 million units.
(passenger cars, in this instance, are "motor vehicles with at least four wheels, used for the transport of passengers, and comprising no more than eight seats in addition to the driver's seat).

The common thread running through the "classic car status" regardless of location is an ageing car of sufficient interest to be valued and sought by collectors and worth preserving or restoring rather than sending off to the breakers yard.

Invariably the value of the classic car is inherently linked to the manufacturer's original design, and every element of the vehicle’s history, pedigree, alterations, remodeling, or remanufacturing will affect the overall valuation.

This, in turn, relates to the sum for which the vehicle is insured in the event of a claim for loss or damage. 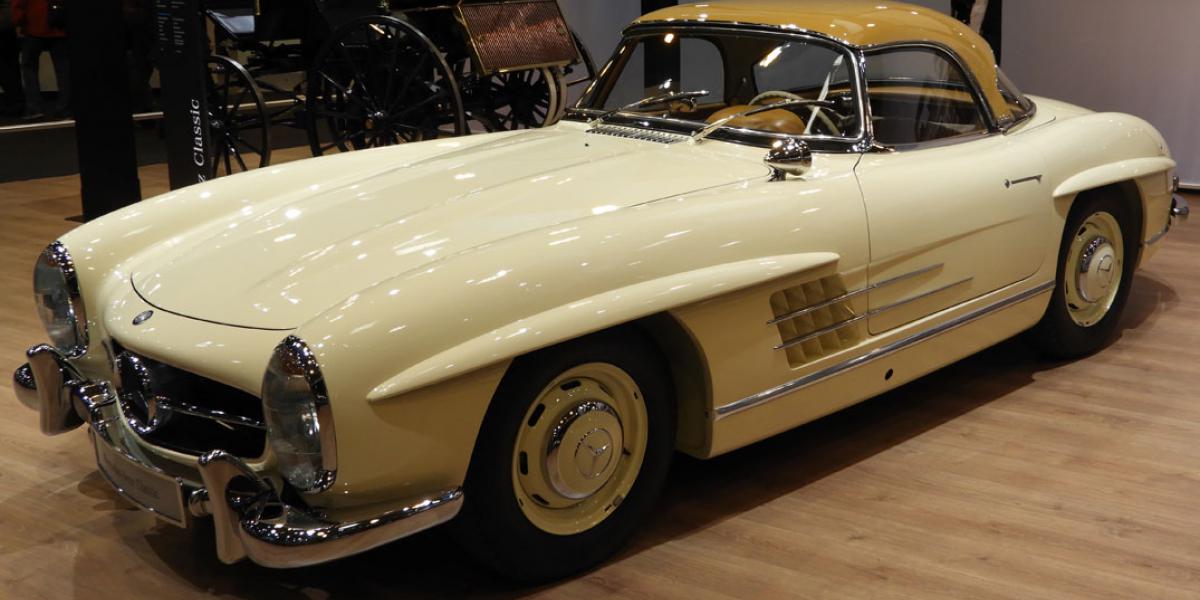 In racing the 300sl roadster (open topped) with a top speed of 160 mph, up to 20mph lower than the competing Ferraris and Maseratis won races all over the world due to it's durability maintaining its top speed for over 11 hours in some races.

Just two of these open-topped units were built specifically for racing in the 1957 American sports car championship. Paul O’Shea clearly defeated the competition, to win in Category D following his previous two successes racing the Gullwing.

What factors contribute to this exalted "Classic Car" status:

The intangibles: Style, nostalgia, performance, rarity, obsolescence, its iconic status associated with celebrities and film, all of which contribute to a car value that stops going down in price as it ages and begins to rise again.

The 2CV6 is prominently featured in the 1981 film For Your Eyes Only as James Bond's most unlikely mode of transport with Roger Moore and Carole Bouquet. 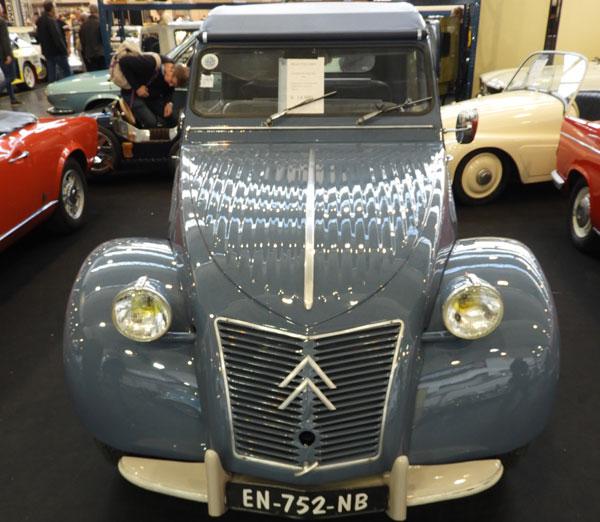 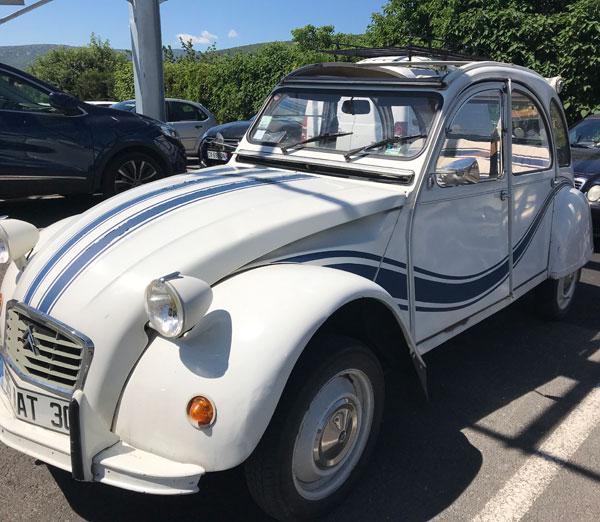 Manufactured by Citroën for model years 1948–1990, over 8 million made and still very much in demand in Europe and in the USA.

And other influences on classic car status....

Then binge-watch the Dukes of Hazard, Starsky and Hutch, Back to the Future, Ferris Bueller's Day Off (would that be the Ferrari 250 GT or the Modena Spyder?), The Love Bug, Goldfinger, Bullitt, Day of the Jackal, Thelma and Louise, The Italian Job, and Fast and furious.

OK, I hear cries of "but what about the Chevrolet Corvette and the Volvo P1800"?

I have also failed to mention the Facel Vega Excellence, the Volga Station Wagon GAZ-2402, and the Bavarian Motor Works.

In fact ( or in fact not actually based on any facts), if you asked anyone what their top ten classic cars is, the responses would, shall we say, vary enormously.

Pinin Farina competing with Bertone won the job of producing the Giulietta Spider, Bertone got the Sprint.. 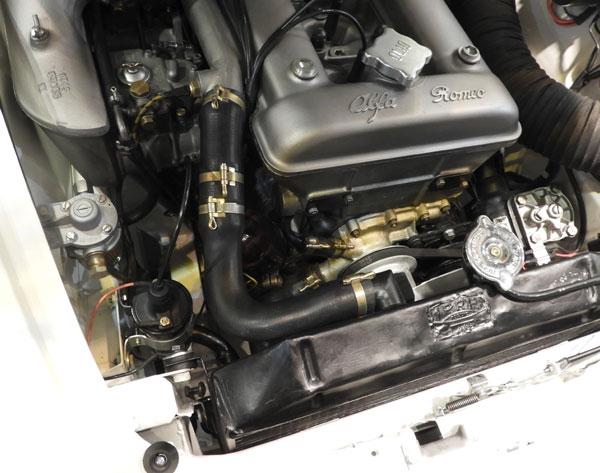 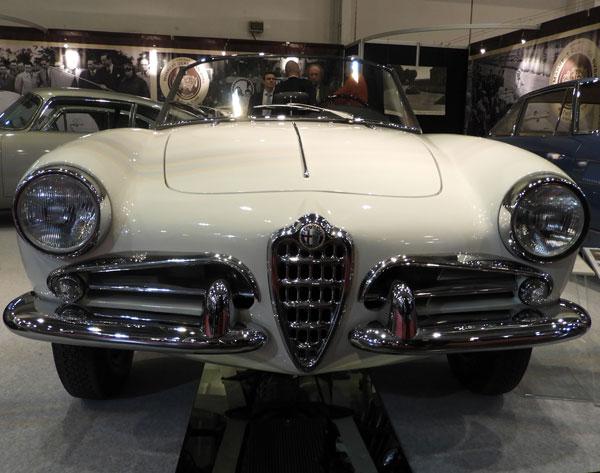 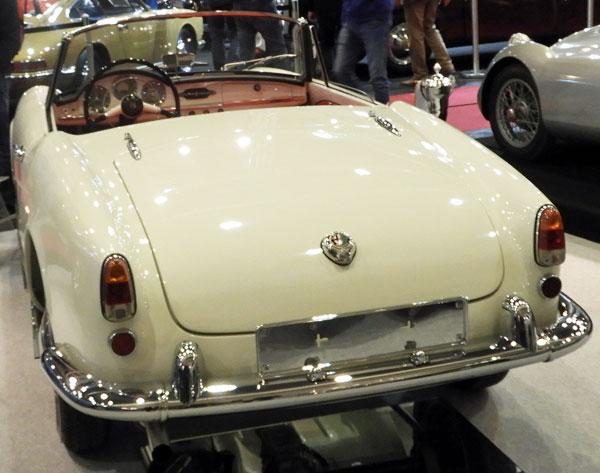 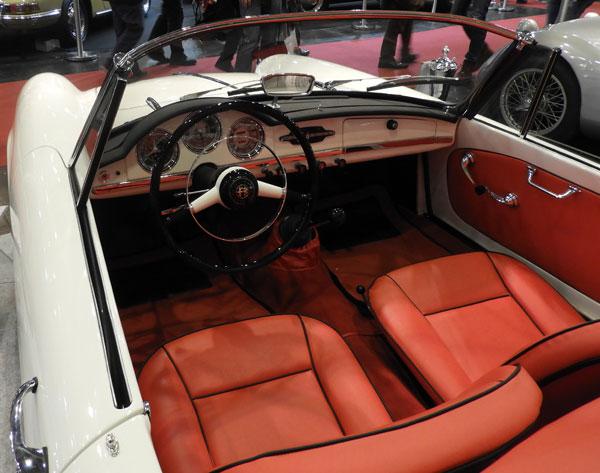 Initially destined for the American market, the Giulietta Spider was a huge success in Europe.

Day of the Jackal

A 1961 Giulietta Spider features in the classic political thriller  THE DAY OF THE JACKAL (1973) based on author Frederick Forsyth's 1971 international bestseller book of the same name featuring Edward Fox as the Jackal as seen in the following extracts.

The timeless, iconic and so very "British" classic car

In 1956 the Mini then known only as XC9003 was the smallest of three cars that had been on the drawing board at BMC (British Motor Corporation Ltd)  since 1955 but, was on the back-burner, the larger two with prototypes already developed.

The BMC was formed in 1952 when competing companies Austin and Morris agreed a merger. 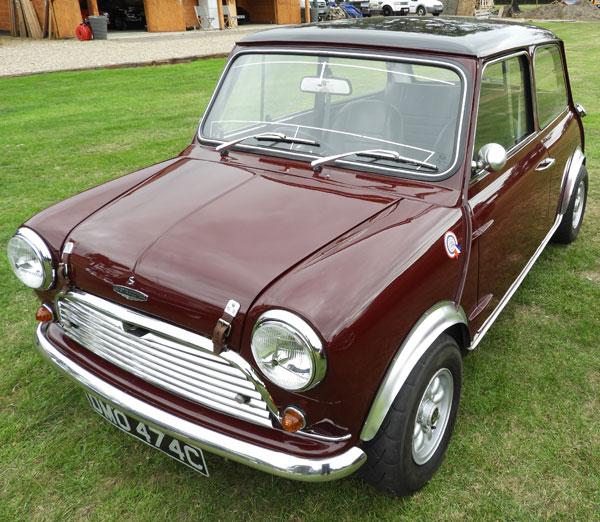 The great thing about this classic car is that it has been so accessible as an affordable economy car in comparison to other prestige icons which such as the E - Type Jaguar which are beyond the purse strings of the majority of us.

The closure of the Suez Canal, a major oil supply route from October 1956 until March 1957 and an Oil embargo by Saudi Arabia on England and France resulted in petrol rationing in the UK.

Accordingly, the focus at BMC was abruptly switched away from its larger siblings (XC9001 and XC9002) to the Mini (XC9003) to meet the challenge posed by the slump in sales of large cars and the huge demand for the fuel-efficient German Bubble car and the two-door 479cc Fiat 500. 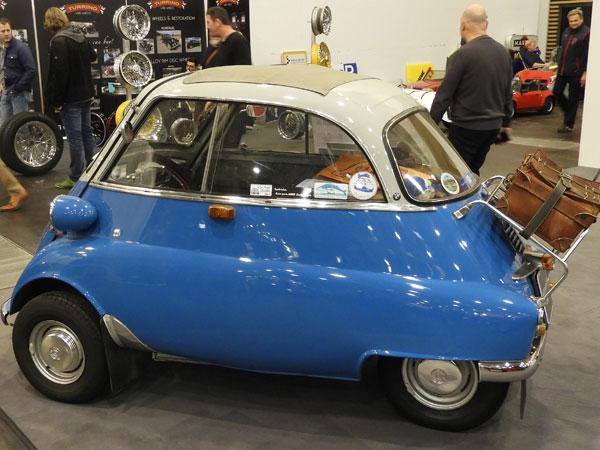 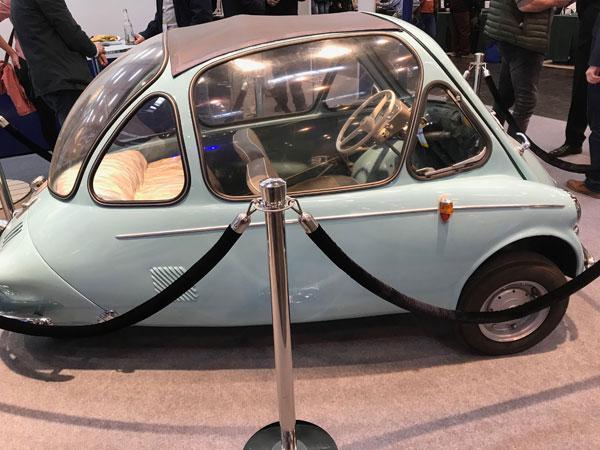 Designer of the Morris Minor assigned to the Mini.

Alec Issigonis had previously led the design of the Morris Minor, which was the first British car to exceed 1 million sales.

The Morris Minor would go on to nearly 1.7 million sales and still be in production 10 years after the launch of the Mini with production taking place at Cowley, Oxford, England, Malaysia, Australia, and New Zealand.

The chairman of the BMC, Leonard Lord, who was apparently more than just a little irked about the bubble cars being imported to the UK defined some basic parameters for the design that included the use of an existing engine unit to keep costs down and be contained within a box that measured 10×4×4 feet, and the passenger accommodation should occupy 6 feet of the 10-foot length. 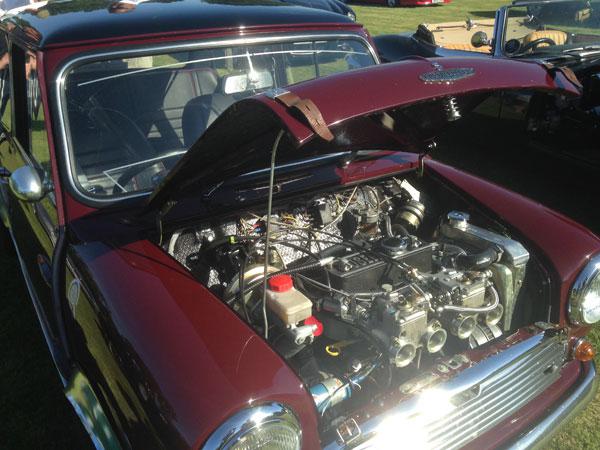 Transverse Engine with side mounted radiator on a Mini Cooper S 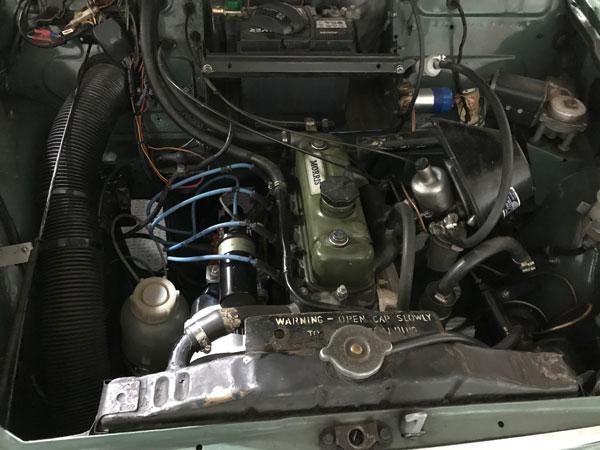 Why was the Mini considered a success?

The Mini was radical in that the passenger and luggage space occupied 80% of the car's footprint.
The innovative design that Alec Issigonis (later Sir Alec Issigonis) introduced was the adoption of Front Wheel Drive (FWD), so there was no transmission tunnel going to the rear wheels taking up space down the middle of the cabin and, of course, a reduced car weight without the prop shaft and rear-wheel differential.

The required engine bay length was reduced by mounting the small engine transversely compared to a longitudinal position.

The 848 cc engine was a water-cooled four-cylinder, and because the engine and the transmission were so tightly associated, they shared the same lubrication.

Other aspects contributed; the windows slid horizontally, allowing single skin doors and contributing to that extra elbow room. Door hinges and the car's seams were on the outside, which benefitted the interior space and the assembly.

So the attributes of small vehicle size, thus using less raw materials and a significantly enhanced passenger/luggage to engine space ratio combined with an economical small engine, was of great appeal and all for £496 for the working classes to use.

Not only that but it was a joy to drive, with enough power, great for parking and a unique suspension system that combined with the positioning of 10 inch wheels at the four corners of the car gave it great stability but with handling of a Go Kart.

When the The Austin Mini Cooper and Morris Mini Cooper debuted in September 1961 with larger 997 cc engines increasing power from 34 to 55 bhp giving it a performance car status which was reflected on the racing circuit, it was the perfect catalyst to catapult it into the public consciousness.

The legacy of the Mini is that it established the now-commonly adopted transverse engine, front-wheel drive layout as an entirely practical proposition in nearly all compact cars seen today.
It was voted in 1999 as the second most influential car of the 20th century, the No. 1 spot going to the Ford Model T.

The Morris Mini-Minor and the Austin Seven, which soon became known as the Austin Mini, were launched in 1959.

The best-selling British car of all time

The car was marketed under two main brand names, Austin and Morris, until 1969.

It wasn't until 5.3 million cars and 41 years later that the last Mini, a Rover Cooper Mini Sport, rolled off the production line at Longbridge on 4 October 2000.

Now that is a classic car!